Building occupants, pedestrians may see drones in use 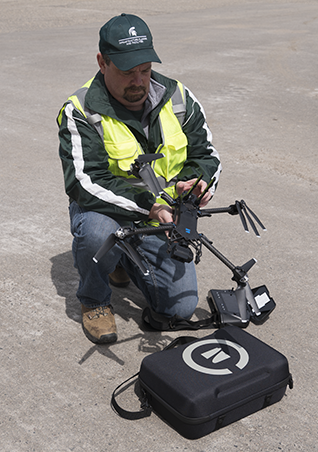 Watching the drone 50 feet up fly toward the top of the Landscape Services’ salt dome entrance only to abruptly halt, fly off in a new direction and then perform another unexpected course change can make one start to wonder about its pilot’s flying skills.

But the drone, designed to perform building inspections and site surveys, made those flying decisions itself, autonomously capturing photos at specific locations and then heading to its next position without delay.

The human pilot provided basic instructions and flying parameters, and the drone programming then took over, flying around the structure to assess its job and then reporting back that it would need about 25 minutes of flight time and two batteries to take more than 850 photos.

An accompanying software package will use the photos to construct a three-dimensional image of the structure to estimate the volume of salt stored within. Previously, salt stored after the snow season was eyeballed and educated guesses were made.

MSU faculty and staff can expect to see drones flying near buildings regularly now that Infrastructure Planning and Facilities has put autonomous drones into operation as a safer and cheaper alternative to having work crews use aerial lifts. The drone teams will wear safety vests identifying themselves as drone operators.

“First and foremost, our focus while using the drones is the safety of the campus community,” said Mark Lutkenhoff, IPF structural services manager. “Only licensed commercial drone pilots will operate them and only then as part of a team. At least one person will watch the drone to ensure it doesn’t fly over pedestrians or create other potentially unsafe situations.”

The drones ease the work involved in frequent IPF tasks such as roofing and masonry inspections, construction site surveys and tree mapping. By allowing visual inspections of hard-to-reach places like bridges and radio towers, the drones save time and money spent moving and setting up aerial lifts, while providing greater and more detailed information. They also promote worker safety by reducing the need for lifts, which are platforms elevated by an articulated arm.

“Any time you’re 60 feet up on a lift doing inspection work the margin for error is much less than when your feet are on the ground,” said IPF roofer Matt Vohwinkle, who is one of IPF’s licensed drone pilots. “Flying drones will help our crews get better info more cheaply and without the safety worries of a lift.”

Already, one of the IPF drones was used to inspect solar arrays on campus to verify their operation by using the drone’s ability to capture thermal images.

Each flight is individually reviewed and approved in advance by MSU Police, consistent with the university ordinance regarding the use of uncrewed aerial vehicles. Drone usage restrictions for IPF pilots include prohibitions against flying over pedestrians or vehicles, or at Spartan Stadium during games.

For members of the public and anyone not approved by MSU Police, operating a drone, including flying from, to or over MSU’s property is strictly prohibited. Violations are a misdemeanor offense that may result in criminal prosecution. The prohibition applies regardless of whether a pilot is licensed by the Federal Aviation Administration.

IPF staff will work to avoid flights near populated residence halls by scheduling inspections during breaks or over the summer, but if one is necessary, staff will work with Student Life and Engagement to ensure residents are notified in advance, similar to what occurs now when aerial lifts are used.

Top photo: IPF mapping coordinator and licensed drone pilot Jeff West watches a drone he launched to estimate the amount of snow-melt salt in storage. Above right: West checks the drone and its battery before launching it. The drone can launch from and land on the marked case next to him or from a person's hand.